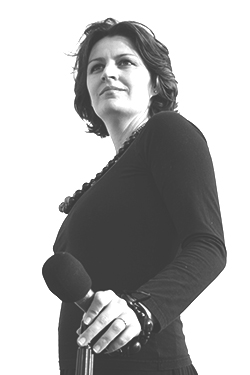 “Yolande Strauss is why not. See, first off you have to be able (male or female) to carry off a power ballad to impress a hard-bitten cynic like me, and Yolande does that and more. It doesn’t hinder her any that she has more than a passing aural resemblance to Karen Carpenter, both in tone and style and will obviously help people to ‘get’ her.” ~Steve Gilmore, Rebel Riffs (Jan 29, 2010)

Yolandé Strauss started doing music at a young age and handles herself very well in both the Afrikaans and English market. Her favorite genre is cabaret, but for corporate functions you can hear her fluently singing in the pop, rock as well as the jazz genre.

As a student at the PU for CHE Yolandé belonged to an amateur Student Theatre Group – Alabama Student Company. She toured with them for three years, doing between 50 and 60 shows a year throughout the whole of South Africa. Her time with them proved her to be an outstanding soloist and stage performer.

In 1998 and 1999, she teamed up with very talented songwriter Herman van der Walt and entered the ATKV’s talent hunt for young Afrikaans singers/songwriters – Crescendo. (Careers that kicked of with Crescendo includes icons like Anna Davel, Karin Hougaard, Reana Nel, Jak de Priester and many more). The songs Kaalvoetkind and Pleister made it to the final round (top 3) on both occasions. Music videos for both songs were produced and aired on SABC2.Yolandé also came 2nd in Beeld’s Vuurdoop for songwriters in 2000 with her own composition Misreën, loosing to now famous Mel Botes.

Yolandé has since done a one women show called Blouklip (2002), Doringdraad Blues Café (2001-With Mari Laufs), Nagkantoor (2004/2005 – With Jannie du Toit, Mathys Roets and Charlene Truter) Vieux Amis (2008-2009 with Mari Laufs), MOERKOFFIE (2013 to 2015- as part of Doringdraadduwwels) and has performed numerously at the informal stages at Aardklop and KKNK.

In 2011, Yolande goes to Paris, France as one of 50 finalists in the Avon Voices Search- their aim to find the best female voice in the world to be the voice of their 100th birthday. Only 3 women from South Africa were honored enough to be chosen.

While staying in Cape Town (2012-2106) she kept herself busy as pianist and backup vocalist for a number of album recordings and live performances for numerous Cape Town artists and bands.

Yolandé recently moved to Centurion with her husband André and 2 sons Aiden and Lennon. Currently she is involved as composer/ songwriter in fim director and award winning author Martyn le Roux’s Afrikaans film DIE PELSLOPER. The film releases in 2019 and numerous of her songs and background tracks will be heard in the film.

She is also an aspiring Videographer, Photographer and Afrikaans blogger.